World War, Meteorites Striking the Earth and a Great Earthquake and Tsunami that wipes out many Islands and Coastal Regions are events revealed to Johann Melchizedek Peter from “God” in great detail. Below is the information. As you can see, the things and details revealed are very elaborate and not vague. There are specific dates, locations and incidents described. If the things to come are true, then it would be of great importance to inform as many people as possible in order to prepare for the times at hand.

There will be a situation in Spain that will require the intervention of the United Nations and the world. USA will play a key role in this intervention and when this grows to the level of becoming a major USA intervention, many nations of the world will not flow with this. Within USA itself, there will be great unhappiness that takes place to the extent of the breaking up of the union of the United States of America. The many visions of internal strife and major riots and instability that God would have revealed to His beloved saints would have started growing during the years of famine and become uncontrollable during the intervention into Spain. Internal civil wars would result and this would cause many countries to be concern. Major European countries would disagreed with the intervention in Spain and seek to go against USA. Many other nations would begin to react unfavourably towards USA and ask that their troops and armies stationed in outposts in their countries to leave (South Korea, Japan, Philippines, etc.). The greatest surprise to all would be an attack of a major outpost of USA in India by China with 20 warships of which two of them are aircraft carriers. After successfully destroying the bases, the Chinese warships continue towards USA in the direction of Washington and New York while USA is internally fighting its own civil war. A major sea battle begins and the Chinese loses two warships (an aircraft carrier and a destroyer) with other ships damaged. Seeing no victory, the Chinese ships return back to China.

In the meantime, major unrest also takes place in the continent of Africa and major wars are fought between many countries. Out of about 50 countries in the African continent, only 8 remained with their borders extended all over the African continent. South Africa enlarged itself to more than two to three times its size. This major unrest spreads around the world and in Brazil three groups with mafia like connections fight for control over the country. In Argentina, a major coup d’état takes place. Countries of the whole world enter into a major period of unrest and riots. In Europe, the major countries of Europe led by England, France and Germany continue to press for a European union that would include the former Soviet east European countries and this would cause unhappiness in Russia resulting in outbreak of war between Russia and Europe. The whole is at war but not a war between the Axis and the Allies but each country has its own unrest, some civil wars and then border wars to enlarge and control more territories fought in Africa and Europe. USA breaks up into several countries and no longer exists as USA. This impacts the entire world. In the Middle East, the war between the Shites and the Sunnis intensify and two nuclear devices were detonated.

During the first phase of the European war, Russia suffers losses and in the midst of this war, meteorites hit Russia in seven places. The two biggest pieces hit the area where there are two fallen angels bound, releasing them. Their release is not caused by the meteorites as their captivity is more spiritual caused but the natural events are permitted as sign posts of events that take place spiritually. The areas that the meteorites hit in 2027 are as below shown in red dots, with biggest as red circles: 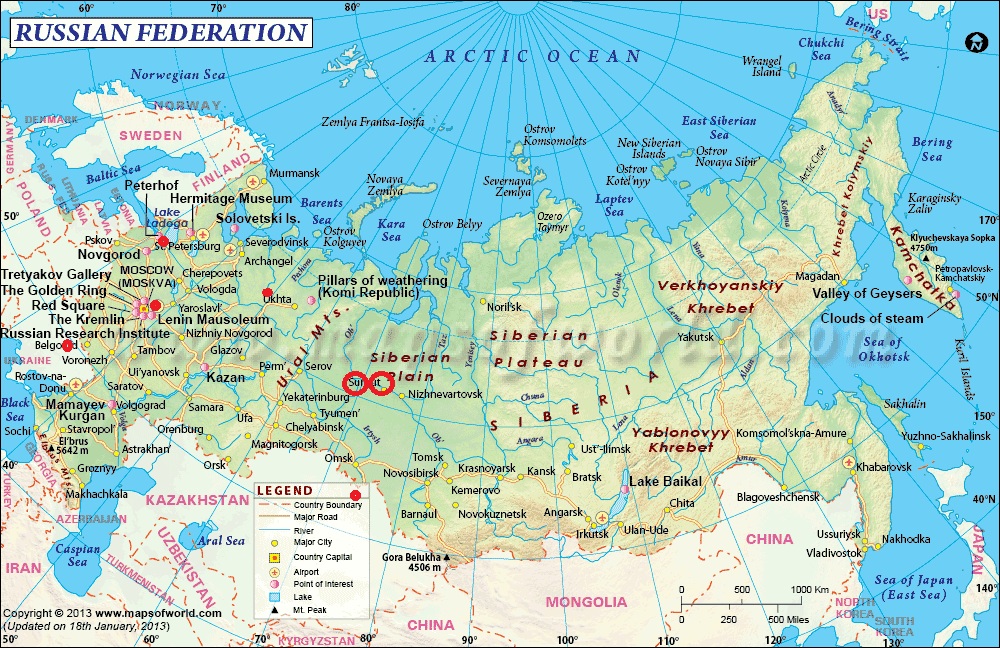 Taking advantage of the shock of the meteorites falling, England, France and Germany led the assault into Russia. They conquered Moscow. However, the Russians counterattacked on two fronts, from St Petersburg and from Moscow and successfully drive the Europeans back. Just as the Russians are about to conquer England, France and Germany, a worldwide catastrophic event strikes the whole planet.

A worldwide earth shaking movement took place in every country of the earth – like the whole earth being shaken simultaneously. Major eruptions of volcanoes take place and Iceland is covered by the sea. England disappears under water. The major fault that is present on the Western side of USA erupts and the earthquake extended all the way from North West continental area of the USA all the way down to Mexico with entire coastlines disappearing under water. The quake extended throughout the length of the South American coastline along Chile. The same fault line in the Indian Ocean that erupted in 2004, erupts more severely again. An earthquake that spans many countries all the way from Turkey to China erupts causing much destruction. An undersea earthquake erupts to the East of Philippines and causes the largest tsunami the world has never seen at a height of 300 metres at its epicentre. It is a crescent shape, with the top curve about longitude 165 latitude 45 and the bottom curve longitude 165 latitude 0 (equator); and the middle curve was around longitude 140 latitude 17.5 (near the Northern Mariana islands). The following is a rough map of the events: 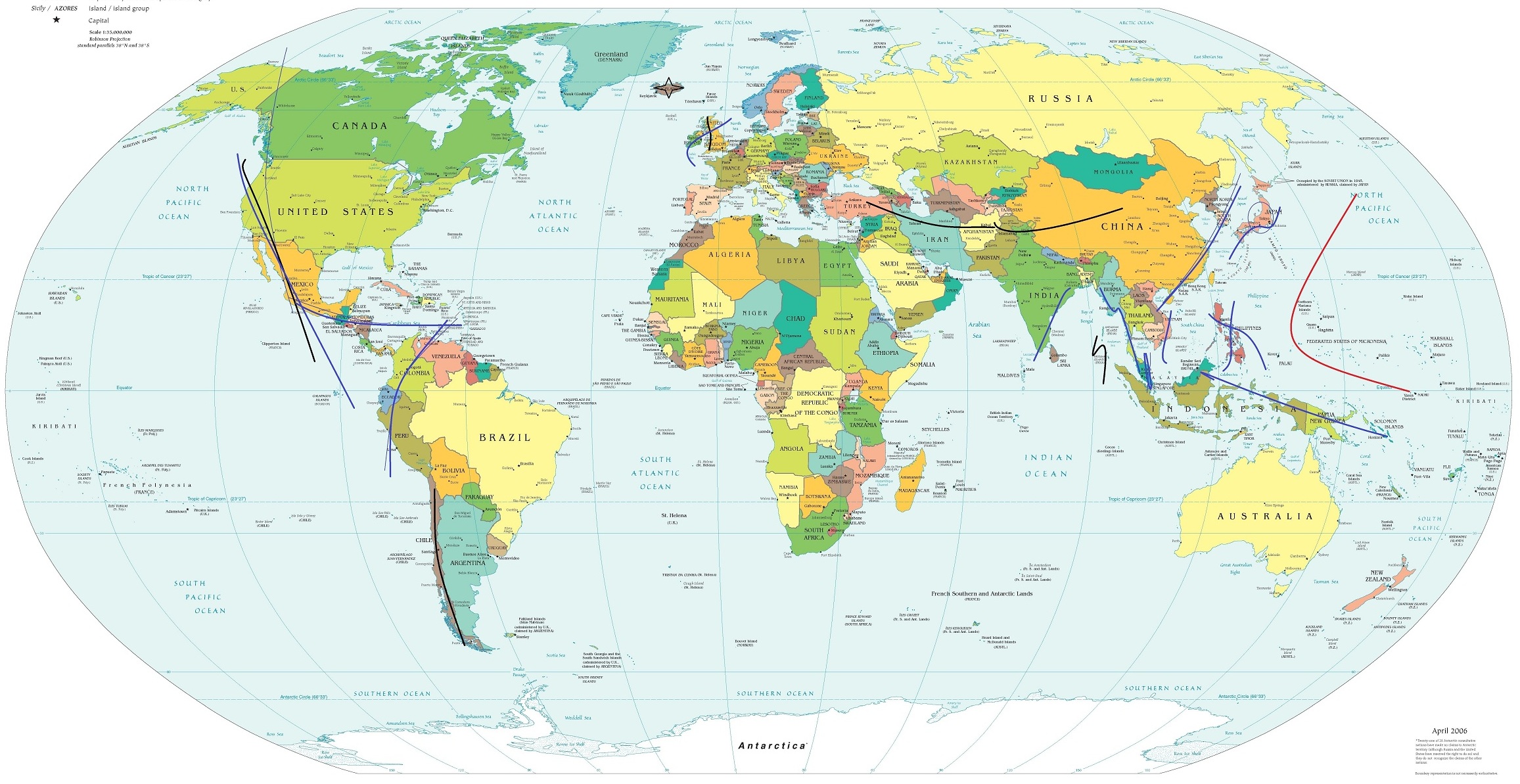 The black lines in the map show the size of the earthquakes. The blue lines show the various water levels and tsunami covering the coastlines and the red line crescent shows the biggest tsunami that world has ever seen. It totally wipes out the nations of Philippines, Singapore, huge parts of Malaysia and major coastlines of Asian countries. It reached the Western coast of USA within a day and wipes out what remains of the earthquake that took place. In Australia, Ayers Rock is split into two and new land appeared to the south south-east of Australia such that Tasmania is no longer an island. New land appeared in New Zealand such that both North and South Islands became one land mass with more land added towards the north east region towards Australia. The world map will look different after the earthquakes and tsunamis with North and South America becoming separated by the sea. Sea coastline levels worldwide become higher by about four to five metres.

From 2020 to 2027, we will be involved in a major exodus of moving around 50 million people to areas of refuge as shown in visions. The major areas are Australia, Western areas of Canada, Russia, parts of Asia inland, South America, Ethiopia, etc. These visions will come to pass. In working closely with the angels, already supernatural things have taken place. On Tuesday 27th November 2012, when Ps David, Amy and I were driving between Sydney and Canberra, we were transported around 12pm by a distance of nearly 110 kilometres and taken to an area where we met with the angels and archangels. The map below shows the distance and approximate time when we were physically transported from point A to point B: 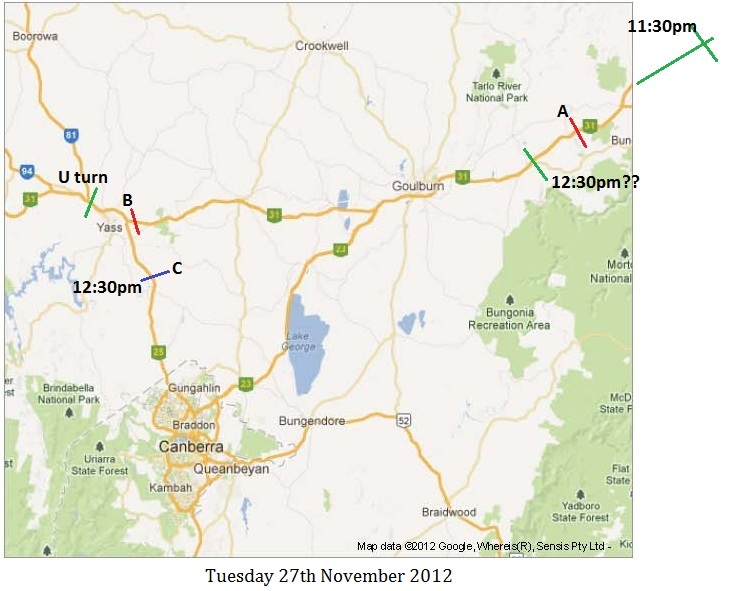 At point B, I realized that we were in a different place and made a U turn to go back by the Barton Highway (a north-west road to Canberra) when we would have originally taken the Federal Highway (a north-east road to Canberra). Our last time check during the drive was 11:30am and we were so caught in the excitement of the transportation that by the time we check the time again it was around 12:30pm and we were at point C, which is something impossible for if we had not been transported we would still be somewhere before the turning of the Federal Highway. This event has changed us physically and spiritually.

All these are parts of our many varied angelic encounters and there are many more supernatural things in store when we will go publicly around the world from 2022 to 2026 to warn of these coming events. In the meantime, to those of our friends, partners, church members in Sydney, Singapore and around the world who have a chance to hear these messages, please do prepare yourself during the next seven years and go to a place of refuge that the Lord has chosen and will lead you to. Our desire is that you be safe and continue to prepare for the rapture and the coming of the Lord which we will speak more about in the fullness of time.

For those of you who live in countries that will be severely affected by the coming wars and catastrophes, please start praying over these next seven years of the Lord’s Will and destinies for your life and where you should rebuild your base and family. Our prayers together with yours are that the Lord would save as many souls and lives as possible.