A Discovery Of A Mysterious Map

A Stargate generates a wormhole between itself and a complementary device at another location, by being supplied with a threshold amount of raw energy. Objects in transit between gates are broken down into their individual elemental components, and then into energy as they pass through the event horizon, and then travel through a wormhole before being reconstructed on the other side and exiting another Stargate.

According to the film and Tv show of the same name, A Stargate is a name for a class of devices which allow almost instantaneous travel between places. Stargates are circular devices marked out by nine chevrons spaced equally around their circumference and 39 symbols displayed on an inner ring. They are typically 22 ft in diameter, 64,000 lbs in weight, and thought to be made of an unknown substance. The gates are almost always operated standing vertically, though they are operable in any orientation.
Wormhole Physics

A wormhole is a hypothetical “tube” in space connecting widely separated positions in the universe. Einstein believed in them. All wormholes require exotic materials (material with negative energy density) in order to hold them open. In 1993, M. Visser showed that quantum wormholes, once formed, are stable.

Ley lines are alignments of ancient sites, holy places, and specific important locations such as stone circles, standing stones, vortices, and monuments. Ley lines link a number of ancient landmarks by a series of straight lines. Ley lines are literally rivers of energy that flow through the earth and also between worlds and other universes. They are the veins and traffic arteries that make up the universal transportation system. They are found in places known as nexus points. Ley lines occur all over the world in a crystalline pattern based on a system of triangles and that great temples of the ancient world are built into this pattern at these nexus points all over the globe. Some of these places are:

In 1973 KomsomolÃ¢â‚¬â„¢s Pravda (a Russian alternative newspaper) ran an article entitled Ã¢â‚¬Å“Earth, What Are You Anyway?Ã¢â‚¬Â Suggesting that the earth started out as a crystal with angular dimensions. Only after millenia of erosion did the crystal form itself into a sphere as we know it today. Some Soviet scientists suggested that the boundaries of these crystal faces now lie beneath the surface of our planet, and that some protrude to the surface, creating the Ã¢â‚¬Å“vorticesÃ¢â‚¬Â that we know of.

A pattern of mysterious events around the world and across over time has caused researchers to search for reasons. This research led to the discovery of a map showing 12 equally spaced areas around the globe in which magnetic anomalies and other energy phenomena occur. (e.g Bermuda Triangle etc.) This map of these energy points and intersections described as “rivers of energy” was somehow lost to history or purposely taken out of circulation for many years. Recently, it has been found.  Here it is: 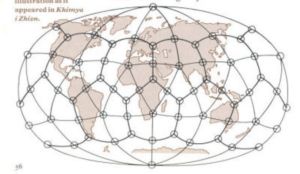 Interesting facts: According to map researchers the Giza Plateau, the location of the great pyramid IS the most powerful vortex point on the planet, and that the KingÃ¢â‚¬â„¢s Chamber within the Great Pyramid represents a narrow gateway to stars. This is the reason that the pyramids were built at this location.

The architect of the Pyramids was the high priest Imhotep, who began building with simple stepped burial chambers and gradually refined his art into the amazing structures that you can see on the Giza plateau today. Evidently he stumbled upon the intersection of some key ley lines which pin-pointed the exact location of the Egyptian stargate.