I understand that from a biological stand point, women have a lot more “stuff” to deal with than men. Child birth, periods, the whole female internal goodie bag tilts the scale in favor of guys, we got it easy.

However a new study may be tilting that scale back in favor of the girls team., the coregasm. The “coregasm” is an exercised educed orgasm that researchers have been studying and links certain exercises to women having orgasms at the gym or while working out! The closest a guy ever gets to that is the creepy Eastern European guys who face the jets in the hot tub.

The coregasm got it’s name because of the link of working out the core or abdominal muscles and women having orgasms. It’s not as new as you would think, scientist Alfred Kinsey and his colleagues first reported the phenomenon in 1953, saying that about 5 percent of women they had interviewed mentioned orgasm linked to physical exercise. I didn’t even know women were allowed to have orgasms in the 1950’s.

Debby Herbenick, co-director of the Center for Sexual Health Promotion at Indiana University says,”the findings add qualitative and quantitative data to a field that has been largely unstudied.”

The topic of the coregasm has been exploding all over the media, again, and again and again. Despite the hoopla, there is little scientific research about the exercise-induced orgasms,” Herbenick writes in a special issue of the journal Sexual and Relationship Therapy released this months in an article titled the 5 Myths About Women’s Body.

Herbenick used surveys online to collect her information, which included answers from 124 women who had experienced exercise-induced orgasms and 246 women who reported exercise-induced sexual pleasure. Most of the women, ages 18 to 63 and an average age of 30, were in a relationship or married and 69 percent said they were heterosexual.

Herbenick found that about 40 percent of both groups of women had experienced exercise-induced pleasure or orgasm on more than 11 occasions in their lives. Most of the women in the “orgasm” group said they felt some level of embarrassment when exercising in public places. The “orgasm” group mostly said during the experiences they weren’t having a sexual fantasy or thinking about someone they were attracted to.

45% of the women studied said their first coregasmic experience was linked to abdominal exercises, 19% linked to biking/spinning(which explains the popularity in spin class), 9.3% linked to climbing poles or ropes; 7% reported a connection with weight lifting, 7% from running. Yoga, swimming, elliptical machines, aerobics all triggered coregasms to women exercising. 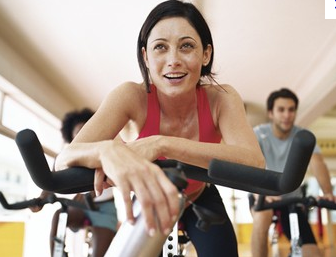 Practice makes perfect, multiple sets of crunches seemed to trigger a coregasm more than a couple repetitions. If this in fact is true, we should be a nation of flat tummied, satisfied women within 6 months. Stomach crunches and orgasms are the equivalent of a man being able to get oral sex, while watching football, drinking a beer and eating an Italian beef, the perfect sexual storm, that satisfies all of the senses.

“We had at least one woman in the study who was a virgin, and she really loved that she could have these experiences at the gym,” Herbenick said.

Like most men, the researchers aren’t sure why certain exercises lead to orgasm or sexual pleasure, “It may be that exercise, which is already known to have significant benefits to health and well-being, has the potential to enhance women’s sexual lives as well,” says Herbenick.

Herbenick admits, like the orgasm, it takes a lot of time and attention from the scientific community to have her theories reach a climax “I think that’s going to be interesting,” seeing the reaction. Is this a tooth fairy type of thing or does it really happen?’ I have no doubt that it happens.”

It’s bad enough us guys have to go toe to toe with the “rabbit,”but now we have to worry about spin class stealing away our ladies affections? What’s next, when will the orgasm madness end? Will the coregasm make us a nation of uber fit, sexually satisfied super women? One can only hope.

The next time you are at the gym or running on the path and see a woman who seems to really be enjoying her workout, it might be best to look the other way, let her have her moment and rest in the fact that she is helping advance science for all man kind.