Why You should Stop Believing in Evolution

When people joyously discover on Ancestry.com that they’re related to, say, a medieval archduke or a notorious Victorian criminal, evolutionary biologists may be permitted to snicker. Because in actuality, we are all related: Humans all share at least one common ancestor if you go far enough back. You are related to every king and criminal who ever lived, to Gandhi and Paris Hilton and Carrot Top. You are even related to me.

But buckle up — that’s only the beginning.

Humanity, after all, is but one ugly branch on the big tree of life. Go back far enough, and you’ll find an ancestor common to you and to every creature on Earth. You are related to your cat — which may help explain why you get that stare all the time. You are related to a Tyrannosaurus Rex, and to the mosquito you just murdered, and to your houseplants. At any given meal, you may eat all or part of a dozen extremely distant relatives.

It’s remarkable how poorly understood evolution is today — how easily “debated” it is — given that its rules have been in place at least since life on Earth began, and that the truth of it is easily demonstrated. In fact, the basic theory has been in a state of continuous reconfirmation since Darwin proposed it in 1859, with geology, biology, anthropology, carbon dating, Pangaea, and every dinosaur bone ever found providing a nonstop barrage of additional proof points.

Here are the rules, in a nutshell:

• Genes, stored in every cell, are the body’s blueprints; they code for traits like eye color, disease susceptibility, and a bazillion other things that make you you.

• Reproduction involves copying and recombining these blueprints, which is complicated, and errors happen.

• Errors are passed along in the code to future generations, the way a smudge on a photocopy will exist on all subsequent copies.

The very notion of “species” is even a little misleading — a discrete-sounding artifice created for the convenience of people who live about a hundred years. If you had eyes to see the big picture, and could watch life change on a geologic time frame, you’d see constant gradual change, as generations adapt to circumstance.

It’s that incredibly slow pace that makes it hard for people to grasp intuitively. When you only live long enough to see three or four generations — a few ticks of evolution’s clock — any tiny generational changes, like humanity getting marginally blonder or taller, are dwarfed by differences in the members among any one generation. Pile on enough eons, and tiny pidgin horses gradually become rideable by gradually less hairy apes. But it’s impossible to see for yourself. 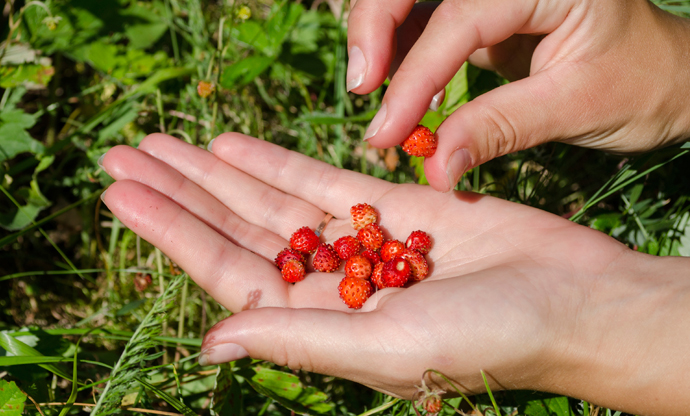 That’s evolution left to proceed at its own lazy, trial-and-error pace. But it turns out you can make the gears turn a lot faster — in fact, we do it all the time. Have you ever seen strawberries in the wild? They’re little tiny things, easily missed if you are not a bird or a bee. We bred them to be big and fat, specifically by only allowing the seeds from the biggest, fattest ones in each generation to reproduce. We similarly manipulate almost every other “natural” food we eat today: Take a stroll through any modern produce section and you can see the fruits, literally and figuratively, of evolution turbocharged by human intervention.

Dogs are another example: We invented the dog, starting with wolves and quickening the natural but poky process of evolution by specifically selecting breeding pairs with desirable traits, gradually accentuating particular traits in successive populations. Poodles, Rottweilers, Great Danes, Hollywood red-carpet purse dogs — all this fabulous kinetic art was created, and continues to be created, by humans manually hijacking the mechanism of evolution.

Listen, nobody wants to be related to monkeys. (Scientist 1, after the Scopes trial: “Well, that was a catastrophe.” Scientist 2: “Yeah? Wait until they find out they’re also related to friggin’ carrots.”) But “that’s just too crazy to believe” cannot be a defense against science. Why do you have sharp canine teeth? An appendix? Hair under your arms? If your body was designed for its current usage, there’s a lot of inefficiency there. If it seems, rather, to be in the process of becoming less…bestial, well, that’s because it is.

Evolution is nothing more than a fairly simple way of understanding what is unquestionably happening. You don’t believe in it — you either understand it or you don’t. But pretending evolution is a matter of faith can be a clever way to hijack the conversation, and pit it in a false duality against religion. And that’s how we end up with people decrying evolution, even as they eat their strawberries and pet their dogs, because they’ve been led to believe faith can only be held in one or the other.

But there’s no reason for people of faith to reject the mountains of data and the evidence of their own senses. Reconciling is easy: Believe, if you want to, that God set up the rules of evolution among His wonders, along with the laws of physics, and probability, and everything else we can see and measure for ourselves. But don’t deny evolution itself, or gravity, or the roundness of Earth. That’s just covering your eyes and ears. And only monkeys would do that.