Quantum Physics Tells Us Separation Is Only An Illusion

“Those trees are your lungs. The earth recycles as your body. The rivers recycle as your circulation. The air is your breath. So what do we call the environment?” — Deepak Chopra: Physical Healing, Emotional Well Being

A new paradigm is emerging out of the rubble of thereductionist model. This new paradigm dissolves the illusion of separateness between anything and anyone.

Discovering More About Our Universe

As we research smaller and smaller units of matter, it has became clear to some that there is perhaps no final unit waiting to be discovered but a fundamental unity to everything. Physicist David Bohm, whose work is described in Michael Talbot’s the Holographic Universe, calls the fundamental unity at the end of all matter the implicate order. David Wilcock makes reference to the Source Field.

A popular metaphor for the universe in this new view is a hologram that projects what we experience as matter, light energy, etc.  An important property of holograms is that information contained throughout is contained within any unit. For instance, if you cut a piece of holographic film with a picture of an apple in half, both halves of the film will still project the whole apple! (This is only true of real holograms produced by shining a laser through holographic film, not of the hologram type pictures and stickers like those found on credit cards).

One phenomena in quantum physics that supports this view is known as “non locality.” Briefly, 2 quanta (photons, electrons, etc.) can become “entangled” that is, influence each other even across vast distances. Physicists were blown away by this because it seemed like these particles were communicating faster than the speed of light. This led to the notion that on some level these quanta are existing without location, thus no “speed” is needed.

Since this is so contrary to our experience and how we have been taught to view things, it can be a bit mind boggling to think that somewhere particles are “speaking” to each other, where this is no location.

Advocates of quantum biology such as Deepak Chopra point to the similarities between phenomena in quantum physics and biology: It can be said that the cells in your body are doing the same thing, communicating on a non-local level. 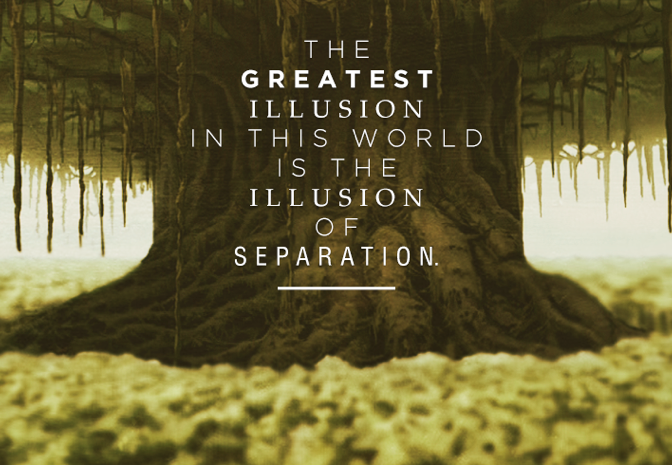 What is this “non-local” level of you and of the universe?

Well, it is consciousness. Your sense of self and continuity of experience is not contained within anything in your brain or body in any physical way, the cells of your body die and all the material that makes the physical you is replaced continuously throughout your life. It is consciousness that remains and gives you this experience.

What is becoming clear is what we experience as separate things is actually an illusion. Since there is only a fundamental unity then the idea that you are somehow separate from the outside environment begins to fade.  The earth in which you live, is you, you are the earth and everything within it.  You are the universe, everything it takes to make a universe is contained within all of us. Remember, consciousness has no boundaries, the only limits to your consciousness, is your imagination.