If conventional wisdom on the history of the human race is correct, then human civilization is not old enough, nor was it advanced enough, to account for many of the mysterious monolithic and archeological sites around the world. Places like Gobekli Tepe in Turkey, the Bosnian Pyramids, and Adam’s Calendar in South Africa, beg the same question: if human civilization is supposedly not old enough to have created all of these sites, then who, or what, had the capacity to create so many elaborate structures around the globe?

It is clear that our understanding of our own history is incomplete, and there is plenty of credible evidence pointing to the existence of intelligent and civilized cultures on Earth long before the first human cultures emerged from the Middle East around 4000BC. The Admiral Piri Reis world map of 1513 is part of the emerging more complete story of our history, one that challenges mainstream thinking in big ways.

Mapmaking is a complex and civilized task, thought to have emerged around 1000BC with the Babylonian clay tablets. Antarctica was officially first sighted by a Russian expedition in 1820 and is entirely covered in ice caps thought to have formed around 34-45 million years ago. Antarctica, therefore, should not be seen on any map prior to 1820, and all sighted maps of Antarctica should contain the polar ice caps, which are supposedly millions of years old.

A world map made by Ottoman cartographer and military admiral, Piri Reis, casts some doubt on what we think we know about ancient civilization.

The Piri Reis map, which focuses on Western Africa, the East Coast of South America, and the North Coast of Antarctica, features the details of a coastline that many historians and geologists believe represents Queen Maud Land, that is, Antarctica. Remarkably, as represented in this map, the frigid continent was not covered in ice caps, but, rather, with dense vegetation. How could a map drawn in 1513 feature a continent that wasn’t discovered until 1820? And if the continent had in fact been discovered by one of the civilizations known to have emerged after 4000BC, why were the ice caps not on the map?

The paradoxes presented by the map were of little significance to the world until Charles Hapgood, a history professor from New Hampshire, USA, claimed that the information in the Piri Reis map supported a different view of geology and ancient history. Hapgood believed that the map verified his global geological theory, which explains how portions of Antarctica could have remained ice-free until 4000BC.

Hapgood’s presentation is so convincing that even famed theoretical physicist and philosopher Albert Einstein wrote the following supportive forward to a book that Hapgood wrote in 1953:

“His idea is original, of great simplicity, and – if it continues to prove itself – of great importance to everything that is related to the history of the Earth’s surface.” – Albert Einstein 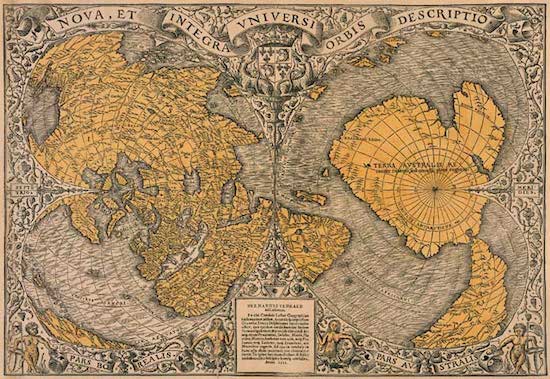 Unquestionably not a hoax, the map is certifiably authentic, but the information on the map is of mysterious origin. Piri Reis himself notes that the map was drawn from information sourced from other, older maps, charts and logs, many of which, Hapgood suggests, may have been copied and transcribed repeatedly since before the destruction of the Library of Alexandria in Egypt, which wiped out the literature of antiquity and vast cultural knowledge.

This hypothesis opens the door to the possibility that some forgotten ancient civilization had the capacity to voyage to the Antarctic, charting the earth, with the technology to make maps, sometime before the ice caps formed. A significant departure from our present understanding of our history.

“…the geographical detail shown in the lower part of the map agrees very remarkably with the results of the seismic profile made across the top of the ice-cap by the Swedish-British Antarctic Expedition of 1949.

This indicates the coastline had been mapped before it was covered by the ice-cap.

The ice-cap in this region is now about a mile thick.

We have no idea how the data on this map can be reconciled with the supposed state of geographical knowledge in 1513.

[Fingerprints of the Gods]

If Hapgood’s theory has merit, as even Einstein believed, then there was a period of time from around 13000BC to 6000BC when Antarctica was located more closely to the equator and was more tropical in climate, much like parts of South America. This was caused by a sudden shift of the earth’s entire lithosphere, he theorized, simultaneously moving all of the continents into their present position, a much different view than the widely accepted explanation offered the plate tectonics theory.

If Antarctica had indeed been further North then than it presently is, and was not covered in ice only as recently as 6000BC, then who was around back then that could have mapped it, long before any known civilizations? And who could have done so long before the advent of the marine chronometer in the 18th century, which finally solved the problem of accurately tracking longitude on the high seas?

Had the entire Earth already been mapped by 4000BC, by a civilization that has been forgotten, as analysis of the Piri Reis map and the theories of Charles Hapgood suggest?

Buck Rogers is the earth bound incarnation of that familiar part of our timeless cosmic selves, the rebel within. He is a surfer of ideals and meditates often on the promise of happiness in a world battered by the angry seas of human thoughtlessness. He is a staff writer for WakingTimes.com.

This article is offered under Creative Commons license. It’s okay to republish it anywhere as long as attribution bio is included and all links remain intact.